Me – “Siri, why are people so illiterate on electronic devices nowadays?”

Siri – “OK, so, here’s what I found on why people are so illiterate in electronic devices:”

“Computers are too difficult and people are computer illiterate.”

Me – “Siri, why are people so illiterate on the internet?”

(Siri, by way of application auto speller) – Airi: “Here’s what I found on the web for ‘people so illiterate’:”

(Siri, by way of same spell checker) – Siri: Here’s what I found on the web for ‘why are people sell in F on the internet’:

Me – “Siri, why are people so illiterate on electronic devices nowadays?”

Siri: “Interesting question, Edward.”… (Is this an A.I. DUH… or sarcasm? Or perhaps a voice recognition interpolation problem?)

Why are people so illiterate on electronic devices nowadays?

We can’t spell! We don’t seem to care about punctuation or grammar! And so many messages are just sentence fragments or word fragments!

Alas, our reliance on digital media has turned off our brains! We’ve become lazy, and worse… stupid, allowing crutches like Siri and Auto-correction parts of all our devices and applications to dictate what we use and how we communicate our thoughts with the rest of the world. It’s “easier” to overlook mis-spellings and mis-understandings when one is busy texting, applying nail polish, farting and eating while driving in traffic! 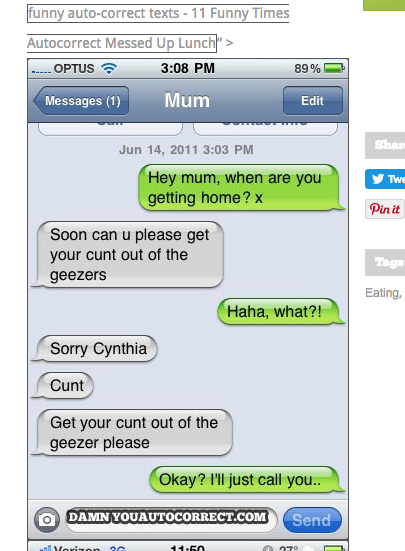 When it’s malfunctioning or overly aggressive in its treatment of our texting, shorthand, slang, or even names it doesn’t recognize, it can get ugly fast. Our coworker’s uniquely spelled name becomes the name of a common household object. Our message goes from the mundane to a triple X rating with a single flipped word. In fact there are entire websites, like the popular site Damn You Autocorrect, www.damnyouautocorrect.com/, devoted to cataloging the mishaps and funny comments that result from overzealous text autocorrection.

Nowhere is it any more apparent that we have become a people overly dependent on the foibles and idiosyncrasies of (semi)artificial intelligence than when we key in, then try to decipher what we really mean to say and what is really meant/sent!

Someday, someone will text or type a perfectly innocuous message and the recipient will read it and press the red button that will unleash a holocaust! It will not appear on Damn You Autocorrect; your world will have ended just minutes before it’s downloaded!

So, regardless of whether you use Siri, or Google Now, or Cortana, or Robin, or Assistant.ai, or Dragon Mobile… to emulate your favorite Iron Man, or Jarvis, or autocorrect, before you hit the “SEND” button, take the time to “proof” your messages, texts and letters the old fashioned way; just re-read it and use the principles of good spelling and grammar that you learned in school!

Posts from Our Blog